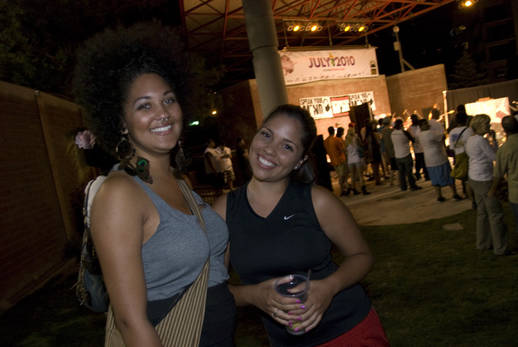 Speak Your Mind brings Reno hip hop out into the sun

Black Rock City Allstars perform at a Speak Your Mind show at the Knitting Factory. The hip-hop band will be performing Sunday at Wingfield Park. (Credit: Megan Evans / Special to Metromix)

Speak Your Mind 2010 at the KnitLocal show features hip hop, poetry and art

When Daniel Hubbard moved to Reno five years ago, he was looking to exit the concert promoting business.

“But I’m the kind of guy who can’t sleep at night if I’m not planning something,” the just-turned-30 Hubbard said.

His hip-hop shows are usually booked at local bars and other small venues, but some events are, well, a bit bigger.

The Speak Your Mind hip-hop festival at Wingfield Park on Sunday fits the bill.

A free eight-hour show that’s part of Artown, Speak Your Mind puts a couple dozen musicians on stage with all the flair of your typical downtown festival.

There are more than 40 local vendors, visual artists on the sidelines, entertainment at the West Street Brick Plaza, and satellite shows at downtown bars.

It’s a big chance for everyone involved.

Artown, for one, gets to show that it supports diverse styles — from ballet and baroque to rap.

“They’ve never had a big hip-hop Artown event,” Hubbard said, and that the city and Artown organizers were very supportive.

Local youth arts organization the Holland Project benefits through exposure and a big raffle with donated prizes such as snowboards. Holland will be in charge of the Brick Plaza with extra entertainment and activities geared for young people.

And local hip-hop acts get a very public venue to show off their skills and reach a brand new audience. Fans will surely come out to see their favorites, but there’s also families and whoever might be hanging out at the river regardless of what’s booked.

While the music is authentic, the event truly is accessible. Not only can passersby come and go as they please, but the park is free of alcohol and the lyrics free of swearing.

Though there is a lot of auxiliary activity, the hip hop remains the focus with local talent like Westyle Virus, Apprentice, Tree Woodz, Black Rock City Allstars, Guilty One, Wordplay and many more.

The close-to-home performers are balanced by a half-dozen national acts, including C Rayz Walz, from the Bronx, New York.

Hubbard said the touring stars add variety and give the event credibility to outside eyes, who may do a double-take at Reno if they see our people holding their own in the same lineup.

The show is really a labor of love for both himself and the artists, all of whom he’s worked with in the past year. Costs are covered through vendor space, and merch sales (not to mention water for the thirsty masses), he said, but “it’s mainly just going to be a lot of work and no money.”

Sunday’s Speak Your Mind is also just the latest in a series of mini-festivals that bear the name.

“There’s not just a certain type of hip-hop,”  Hubbard explained, “and ‘Speak Your Mind’ is just every single type of hip hop where they have something to say that’s important.”

The first such show was at Lawlor Events Center in April 2009, though the turnout didn’t quite fit the scale or the emphasis on national performers.

But Hubbard had better luck with a pair of shows in February and April 2010 at the Knitting Factory that were more localcentric.

Knit manager Dean Hanson said those shows raised more than $1,300 for local charities and each night had more than 1,700 people pass through the doors.

Speak Your Mind won’t be done after this weekend, but for details on the next show, fans will be forced to stop by Sunday and enjoy local talent and beautiful weather. Sorry.

See ride rail for more event details. All events are free, and the outdoor events are all-ages and family-friendly.